Start here About us Blog Login

Givers vs Takers: How To Boost Workplace Productivity & Employee Morale By Hiring The Right Team 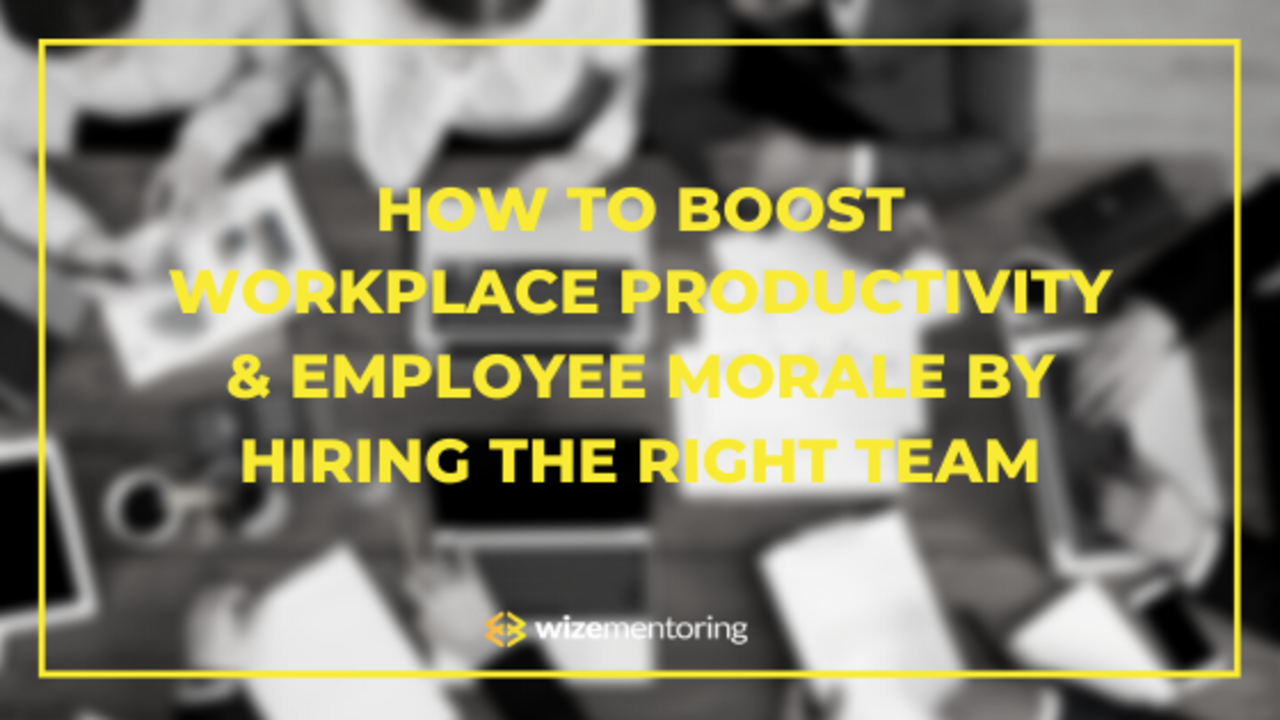 How do you build a great team with great productivity and morale?

You begin by recruiting the right type of people to join you. The right talent gravitates toward the right culture. With great leadership, you can have a championship team versus a team of champions.

In every organisation, there are givers and takers.

The givers are generous with their time, often willing to help their colleagues even if it means sacrificing their own success at work. These are the true leaders. They are selfless and always ready to help someone else. Helping build someone else will lead to building oneself.

The takers are completely the opposite. They're self-servers and energy suckers, willing to step on everyone and anyone in the name of their own self-interest. It's not difficult to guess who's better for the health of your team or company.

Have too many takers around, and you're in trouble. They will squelch the givers. Ultimately the self-serving efforts of the takers will lead the givers to stop helping. They won't see the point.

Based on his research, Grant says that the more often people help each other, share their knowledge and provide mentorship, the better the organisation as a whole does. The results of a culture of helping include higher profits, customer satisfaction, employee retention and lower operating expenses.

And how do you create a culture of helping?

You hire the givers, not the takers. That's where it gets tricky. It's tough to spot a taker on the first impression. Everyone's on their best behaviour in the interview process and will do their best to come off as a giver.

Grant is against hiring based on someone's agreeableness. It can be surprisingly deceptive. He believes that disagreeable givers are the most undervalued employees in an organisation.

These are the people who might have a rough exterior, but who genuinely want to help.

"Disagreeable givers are the most undervalued people in our organizations because they're the ones who give the critical feedback that no one wants to hear but everyone needs to hear," says Grant.

Just because someone is agreeable doesn't mean they're a giver. There are plenty of agreeable takers in this world. Grant calls them fakers.

"This is the person who's nice to your face, and then will stab you right in the back," he says. (You probably know a few.)

Unfortunately, we often don't realize until it's too late that someone is an agreeable taker a.k.a. a faker.

Unless we pay close attention to how someone answers this interview question:

"...Can you give me the names of four people whose careers you have fundamentally improved?.."

Their answers reveal someone's true character because Givers and Takers have very different responses to this question.

The takers will give you the names of four people who have more influence than they do.

Hotshot names you'll be impressed by. This is because takers excel at kissing up. And they use the people below them as stepping stones. They care more about influence than they do about helping.

That's, of course, why they're called takers or fakers.

The givers, on the other hand, will give you the names of four people you've likely never heard of. People who are equal to them or below them on the totem pole of power.

That's because givers aren't in the business of helping to help themselves succeed. They want to build other people up. "And let's face it, you all know you can learn a lot about a character by watching how someone treats their restaurant server or their Uber driver," says Grant.

Finally, it's with good leadership and management of your team that allows Givers to fly with greater productivity. If you, as their leader, do nothing about a Taker in the group, you will lose your Givers or at a minimum, demotivate them.

It's then a race to the bottom. Workplace culture will deteriorate if you are slow in acting. Normally your team is aware of who the Takers are before you but they look to you to take action in removing them.

Inaction on your part as their leader will determine the morale of your team. The best leaders are slow to hire but fast to fire.

An empty seat is better than a seat occupied by a Taker. The best way to build staff morale amongst Givers is to focus on finishing jobs/tasks and producing results.

"Job satisfaction" comes when tasks are finished. This builds staff morale and is much more sustainable than going to some team building session and the hype generally only lasts a day.

If someone is stressed with low morale, it's generally due to having too many unfinished jobs/cycles on hand.

Thus, as a rule, do not start a job/task until all missing information is in hand so it can be finished without putting down and picking up again.

Secondly, focus their attention on finishing one task/job at a time.

For example, if someone is particularly busy and stressed with many half-finished jobs/tasks, you should allow them to focus their attention on finishing one job/task before they go home for the day and watch their self-esteem and morale lift.

Givers are results-oriented so ensure that they have plenty of work on but help them focus on prioritizing their tasks and finishing tasks/jobs and not only will their self-esteem and morale lift, but your productivity and profits as well.

A win/win for all.

We hope that has helped you choose the right people for your team and how to keep them motivated and results focussed.

How about you? Are you a giver or a taker? How would you respond to the question?

P.S. Whenever you’re ready… here are 4 ways we can help you grow your Accounting or Bookkeeping business:

1. Grab a free copy of our book – Accountants 20-Hour Workweek

It’s the blueprint to structure, staff and scale your firm whilst dramatically reducing your work hours. — Click Here

2. Join the Wize WaterCooler and connect with other Accountants who are scaling too

It’s our new Facebook community where business-minded Accountants and Bookkeepers learn to build a firm that runs without them. — Click Here

We’re putting together a new mentoring case study group this month. If you’d like to get the plan, tools and advice from the Wize Mentors to scale your firm… just send us a message with the word “Pulse” - Click Here

4. Work with the Wize Guys privately

If you’d like to work directly with the Wize Mentor team to take you from stuck to scale…just send us a message with the word “Growth”… tell us a little about your firm and what you’d like help with, and we’ll get you all the details! - Click Here

Want to receive our WIZE Words to your inbox?

All you need to do is fill in your details below and we'll send your eBook over to your inbox in a couple of minutes.